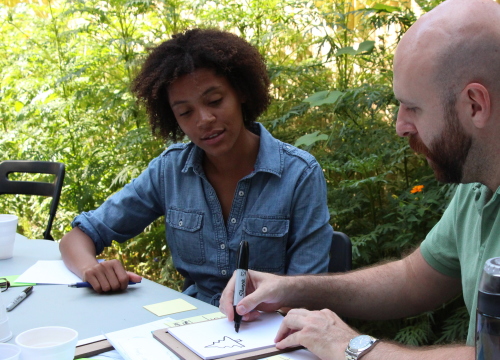 13 Nov A Drawing is worth Thousands of Words

Sometimes people say that a picture is worth a thousand words. But drawing is worth Thousands of words.

Because there is simply no better (or faster) way to communicate what you mean to your team. Often in meetings there’s a lot of handwaving and conversation…and at the end what is remembered? Being active about capturing your ideas visually can make it possible at the end of the day to look around the room and see where you’ve gotten to.

All it takes to communicate your ideas is to be able to draw like a six-year-old!

At The Design Gym we’re passionate about giving people to tools to create change, so here’s five ways you can use drawing to transform your day.

1. One idea per Sticky Note

man, oh man…We tell people this all the time. If you just take an extra second or two to write in capital letters OTHER PEOPLE can read your ideas. On email (and blogs) capitals can look like shouting (sorry for shouting there…) but on drawings and stickies, caps just means legibility.

or Order The Physical Cards Here!

3. Uses words AND pictures together

Without the words, this is just a sketch of some people. It’s actually *hard* to draw people that are badass. But once you write “we are badass” under those people…we know what’s what. Words are not a cheat…they turn drawings into comics! 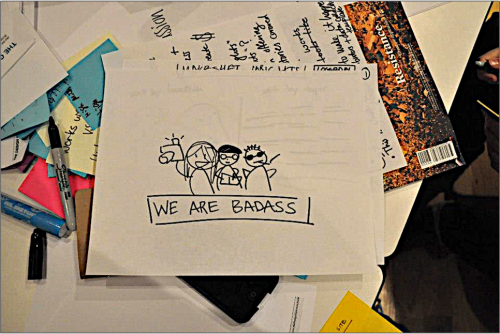 We’re a big fan of templates at The Design Gym for lots of reasons. When we ask people to generate ideas, we often generate a template first. That way, when we scan a wall full of ideas, we can compare apples to apples. Decide ahead of time what 3-4 components you want each idea to cover, mock up the section headers in powerpoint and print out a bunch…or ask people to make their own on the fly. Either way, you’ll help people think through their concepts better and be able to facilitate a better discussion. 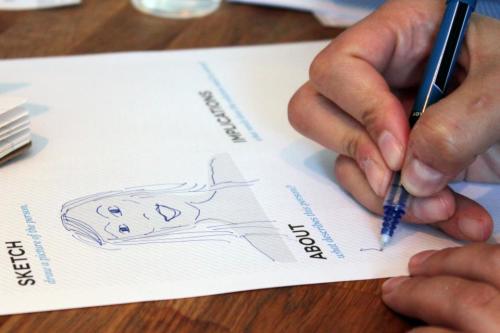 This one is courtesy of our pal @ayraydel…there isn’t one type of drawing…there are at least three types. There’s Thinking drawings and sketches, where you’re working things out for yourself, developing ideas. Then there’s Sharing drawings…where maybe you combine and incorporate a few ideas…and expect that someone else will mark up and collaborate with you on your drawing. It’s when you expose your ideas and let go a bit. Showing Sketches are all about making something a bit bigger and better to be able to share with more people. These sorts of drawings can take a bit more time, but are worth the effort! Below is a final drawing board from the last session of the Studio project.  It took some time and effort, but it really communicates! 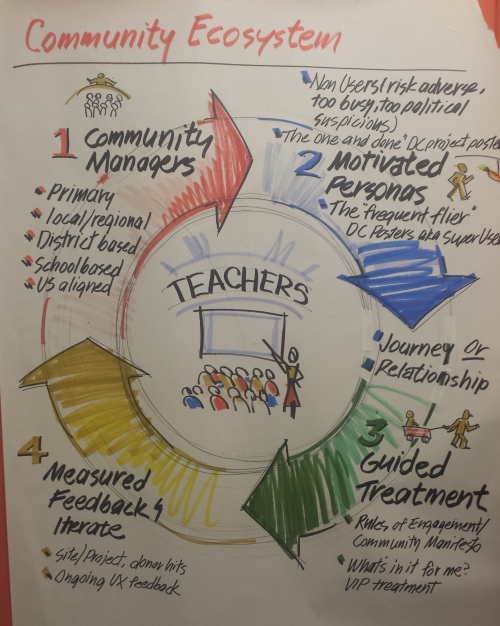 Drawing isn’t just something to use on yourself and your team…using it in your research with stakeholders and users can be transformative, too. This is from a great article on LinkedIn from Tim Brown

Here’s an example of how drawing helped us refine a business strategy for a client: Many years ago, when online banking was still in its infancy, a start-up called Juniper Financial asked IDEO if we thought banks still needed buildings, vaults, and tellers. The team wanted to understand how people thought about money. But that’s harder than it sounds. You can observe customers paying bills or withdrawing cash, but it’s tough to scan their brains while they’re at it.

Instead, the team asked people to draw their money. One woman penned little Monopoly-style houses that represented her family, 401(k), and rental properties. The team dubbed her “The Pathfinder” since she was focused on long-term security.

Another woman drew a pile of money and a pile of things. “I get money and I buy stuff,” she told the team. She became “The Onlooker” who focused on day-to-day finances instead of long-term goals.

This is a bonus…and an easy one. The more you draw the easier it gets. So buy a notebook and get cracking…and check out our Visual Thinking Workpack! 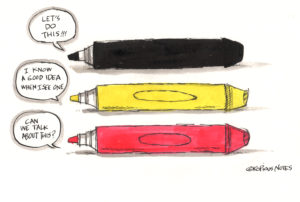 What Color is Your Pen? 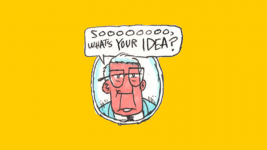 How To Get Your Boss To Say Yes 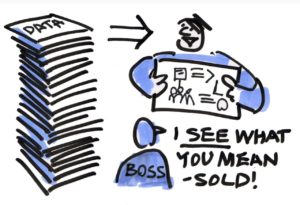